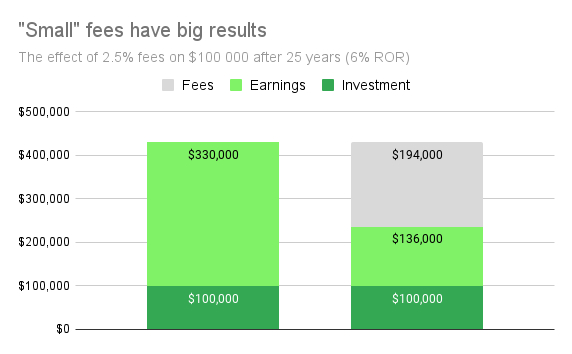 My dad got into investing when I was a teenager in the 1990’s.  We weren’t rich, but my parents were good savers and my dad was putting those savings into the stock market with amazing results.  He had discovered a simple way to make big returns: add his money to a pool with thousands of other investors, give those funds to professional stock pickers and let them do all the work in exchange for a small fee.  The products were called mutual funds, and they were killin’ it.  Between 1990 and 2000, the TSX (then called the TSE) returned about 13% per year on average. The S&P 500 did even better with annualized returns of nearly 19% (not including dividends).

The only thing growing faster than the stock market, was the market for those funds.  In Canada, mutual fund assets grew from $25 billion in December 1990 to $426 billion by December 2001.  That’s annualized growth rate of 29.4%.  (Canadian mutual funds hold almost $2 trillion in assets now, in 2021)

The mutual fund habit was established.  But I don’t mean for investors.  I mean for the industry.  The fees attached to these products, which in Canada are still among the highest in the world, were a drug and they were hooked.   Like a junkie who turns a blind eye to the carnage they leave in their wake, it’s been all too easy for the industry to ignore the wealth they have stolen from investors.

The minority of savers who take an interest in their investments have learned that there are better options for their money than mutual funds.  But huge parts of the financial services industry remain fund junkies, peddling their toxic wares to unsophisticated investors who simply don’t know any better.  The irony is that most investors look to their financial advisors to educate them on how best to achieve their financial goals.  You can see the problem.

A long time ago I heard the Ambrose Bierce quote, “A lottery is a tax on people who are bad at math.”  When it comes to investment products, mutual funds are a tax on uninformed investors.

There are over 5000 mutual funds in Canada.  You might think the huge number of funds would be bad for the industry, but it’s not; it actually works to their advantage.  Think about it: what are the chances that a single fund is going to outperform?  Not great.  But if I create a bunch of funds, then statistically, there’s a good chance that at least one of them will do well.  We know it shouldn’t, but “past performance” is what seduces buyers.  So, it’s a simple matter of culling the losers and you’re left looking like a star.  Less than half of Canadian mutual funds that were offered ten years ago are around today.  This is called survivorship bias.

Still, we’re left with a dizzying array of funds to choose from.  Do investors need that many?  Of course not.  Like cars or shoes or cellphones, every single one of them was designed as a product that could compete with all the other products and make their creators money.  It is not investor needs that are the top priority, it is profit.  We understand this implicitly about other kinds of products, but often forget it when it comes to investment products.  When it comes to mutual funds, it’s sales first, performance second.

What you didn’t know about mutual fund marketing

I have an extended family member who spent two decades as a mutual fund sales person.  She’s a wonderful person, and great at her job.  Month after month she wined and dined financial advisors trying to get them to buy the funds that her company was trying to sell.   When they signed on the dotted line for $X million of a particular product, it was then up to the advisors to convince their clients to make the switch.  Think about that for a second.  Products first.  Investors second.

How do you get an advisor excited about an investment product?  Make it profitable for them.  Front end loads (a bonus when clients buy), back end loads (a payment when they sell), and trailer fees (ongoing payments when they hold the fund) are the common ways advisors get paid.  It’s easy to see the incentives to get investors into mutual funds and to switch in and out of them over time.  We can blame the individual advisors – and some of them might deserve it – but let’s be honest, most people would do the same thing in their shoes.

Inconspicuous, ignored, and, in the end, devastating

How do lowly termites take down a house?  They’re small and they’re hidden from sight.  The mutual fund industry uses the same tactics.  Advisors get away with putting clients in high-fee mutual funds for two reasons.

First, the fees are often hidden.  If there is a discussion of fees at all, it is often designed to be too technical for the average investor to understand (after all, if they were knowledgeable they wouldn’t be considering mutual funds in the first place).  The more ways investors are parted from their money, the more their eyes glaze over: front end, back end, trailers, MER, trading fees, etc. etc.  I really need to get groceries before I pick up the kids from soccer . . . whatever, where do I sign?

The second reason they get away with it is because the fees appear small.  The average MER in Canada is about 2.5%.  That’s a small number.  If I ate 2.5% less today, I wouldn’t notice.  If my latte costs 2.5% more, not a big deal.

But that’s the wrong way to think about it.

If you worked hard to accumulate $1million, that 2.5% fee means $25 000 every year is being siphoned from your account no matter how your investments do.  That’s over $2000 per month, or $100 every single working day.  Ouch.  But that’s only the beginning.

Nearly one third of the the final balance has been eroded by fees.  Similar to the previous example, those fees killed over 50% of the investment returns.

But maybe those fees are worth it

If you raise these concerns with a proponent of mutual funds, the first thing they will say (and maybe the only thing they CAN say), will be, “Yeah, but these mutual funds aren’t like the others.  Even though there are those little fees, there’s a good chance your returns will offset them – and MORE!”

No.  Not really.  When confronted with this wishful thinking, there’s only one thing you need to know: the SPIVA Scorecard.

SPIVA stands for “S&P Indices Versus Active” and it describes a semi-annual scorecard comparing the performance of actively managed funds to that of their benchmark indices.  It seeks to answer one simple question nearly every investor faces at one point or another: Can active managers beat the index?

Year after year, the SPIVA Scorecards report the same findings: mutual funds around the world, including Canada, fail to outperform their underlying benchmarks.  The most recent Canadian report is no exception with well over 90% of funds underperforming over the last ten years, as you can see below.

Two important points: First, unlike other reports, SPIVA accounts for the all-important survivorship bias.  And, second, even though there are always a few funds that do manage to outperform the benchmark, it is impossible to predict which ones will outperform in subsequent years.  In Canada, less than half of all the funds available ten years ago still exist today.  This is called survivorship bias.

How to not pay the mutual fund tax

Back in the 1990’s investors could be forgiven for having their money in mutual funds.  It was far harder and more expensive to buy individual stocks without high quality online discount brokerages like QTrade (what I use), and ETFs didn’t exist.  Fortunately, innovation and technology have come to the rescue.  Investors are surrounded by better, cheaper options – if they can extricate themselves from the grasp of mutual fund salespeople.

If you, or someone you care about, are currently slaves to the mutual fund tax and want to opt out, here are four ways to do that, starting with the simplest:

1. Same person, different products.  If you’re holding mutual funds through an advisor, you can always ask the advisor to sell those funds and buy lower cost products like index ETFs.  Be prepared for excuses.  Don’t accept them.  It’s your money.  There may be fees involved.  Most of the time it’s better to pay them and move on.  If there is significant resistance, take it as a red flag and proceed to one of the other options below.

2. Find a different advisor.  Not everyone is ready to manage their own investments.  Fortunately, there are a growing number of advisors who work on a flat fee basis, even hourly.  There can be a little sticker shock with this approach, but if you take a minute and do the math, you will likely realize that the cost is less.  More importantly, it’s transparent.

The main value of a financial advisor is personal financial planning, not investment management.  If you don’t want to DIY your investments, you can take the financial planning and sign up for an automated investing platform, aka robo-advisor.  These are a great option to build, implement, and maintain a simple, low-cost ETF portfolio.  Expect annual fees of about 0.5%.

3. Be your own robo-advisor.  You can save yourself that 0.5% per year by opening up your own discount brokerage account and buying your own index ETFs.  It’s easier than ever, you are in complete control,  and the ETFs these days are extremely efficient.  For investors who value simplicity, which is a good idea for most of us, the “all-in-one” funds like VGRO or VBAL (no affiliation) are phenomenal.  With a single purchase you achieve international diversification, a set asset allocation, and automatic re-balancing.  Fees (MERs) for these types of products average about 0.2%.

4. Build a dividend portfolio. As trading fees become negligible, the almost-zero cost investment strategy is to buy individual stocks.  But if you’re trading cannabis stocks or looking for the next Tesla, you’ll likely end up losing more money than you save.  Instead, you can build an income-generating portfolio by buying and holding dividend-paying and growing stocks.  I make the Beating the TSX portfolio freely available on this site as a powerful tool for DIY investors to use at their discretion.  Whereas the vast majority of mutual funds underperform their benchmarks over the long term, BTSX has beaten the index by over 90% over the past 30 years.

Mutual funds serve the needs of fund companies and advisors, not investors.  Their fees are exorbitant, they’re riddled with conflicts of interest, and they underperform far cheaper, simpler, and more effective investment products.  If you know someone who is invested in mutual funds, send them this post.  It’s time to end this tax on uninformed investors, and the way we do that is by understanding our choices and making better decisions.

If you are beginning your investing journey, please make use of the free content on this site and grow your portfolio. If you have a few dollars to spare, I hope you will consider supporting DividendStrategy.ca. I’m not trying to get rich . . . 50% of donations are given to Doctors Without Borders. Thank you!

Using BTSX to build your portfolio: a step by step guide