We learned all about RESPs in our last post.  Now comes the fun part: what is the best way to save in an RESP?

First, a quick review of the basic RESP rules.

RESP rules –  the quick and dirty

Given these features, we have a few options when saving in an RESP.  For the following scenarios, we will assume a 6% rate of return.  For all of the scenarios I am going to present, we will maximize our total contributions at $50 000 so that the comparisons are fair.  You don’t have to do this.  The purpose of these examples is to reveal what is likely the optimal RESP funding strategy, not a step-by-step action plan.

The first option, and perhaps the most intuitive strategy, is to contribute $2500 annually to the RESP.  We’ll call this the “Maximize the CESG Strategy”.   Note that to reach the $50k contribution limit, we will have to make a $7500 contribution in year 18. 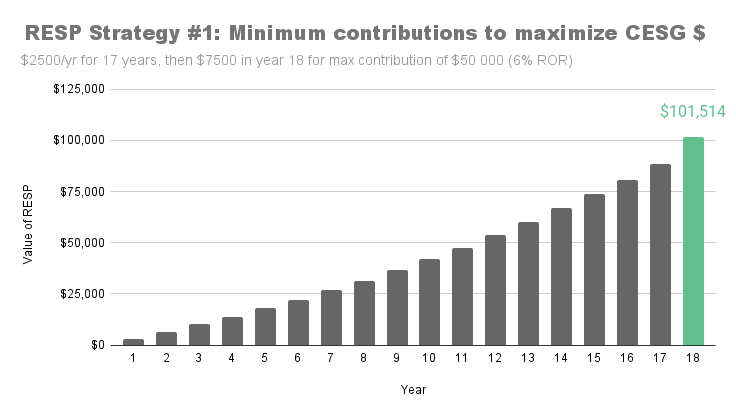 But what if you had the option of contributing $50 000 all at once in the first year?  You would only receive $500 in CESG, but all that money would have 18 full years of tax-free compounding growth. This is an alternative strategy that I’ve seen advocated in numerous places.  Even though, for most people, it may not be feasible to access $50 000 all at once, if you could, does that mean you should?  Let’s run the numbers. 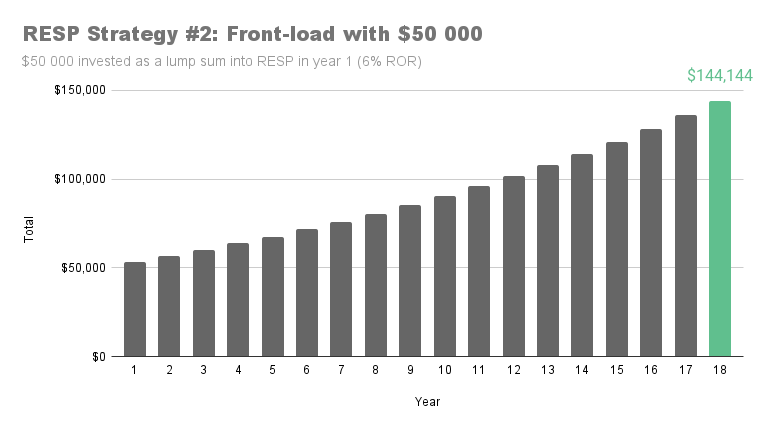 So, we have our answer, right?

Not so fast.  This is not an apples-to-apples comparison because it ignores the time value of the money we are not investing as a lump sum in Strategy #1.  Let me explain . . .

To make a fair and accurate comparison, we need to think of it this way:  Imagine you have $50 000 to contribute to an RESP, and let’s say it’s in your TFSA (you have been using your TFSA, right?).  In the front-load strategy, it all goes into the RESP.  In strategy #1, however, you withdraw $2500 from your TFSA every year and contribute it to the RESP.

But, here’s the important part: the remainder, $47 500, stays in the TFSA and continues to earn investment returns.  Assuming the same 6% rate of return that we’re getting in the RESP, that’s $2850 of investment income in year one – more than enough to cover the following year’s RESP contribution – and that investment income continues year after year.

Thus, a fair comparison must consider the values of both accounts over 18 years.  This is what Strategy #1 looks like taking the whole $50k into consideration:

When is front-loading a good option?

Interestingly, if funds are taken from a non-registered account rather than a TFSA for incremental RESP contributions, the front-loading approach may become more attractive.  This is because money is being moved from a taxable account to a tax-deferred account as soon as possible.

To make this comparison, I ran the numbers for Strategy #1 again, using a 5% rather than 6% rate of return for the account that RESP contributions were drawn from.

The result is slightly less (about $1500) than the front-loading approach.  Even though the difference is small, and there will be variability based on investment returns and tax rates, if one has significant non-registered money, it might make sense to front-load the RESP.

What this reveals is the sensitivity of such strategies to the compounding effects of small numbers – over time, 1% annually makes a big difference.  This is why investors need to be fastidious about minimizing fees.

Similarly, if one were to incur additional taxes in order to contribute a lump sum to an RESP, that would negate much or all of the advantage of the RESP.  Another bad idea would be to contribute to an RESP rather than pay off debts with non-deductible interest.  Pay off those debts, then catch up on Junior’s RESP.

To summarize what we’ve learned so far:

But is there a way to get the best of both worlds?

Well, yes, there is.

This method keeps things simple while balancing the benefits of front-loading and maximizing the CESG.  It contributes a smaller, more manageable $15 000 lump sum to the RESP in year one, then follows that with 14 years of $2500 contributions.  This maximizes our contribution room at $50 000 and also maximizes the CESG at $7200.  The results of this approach can be seen here: 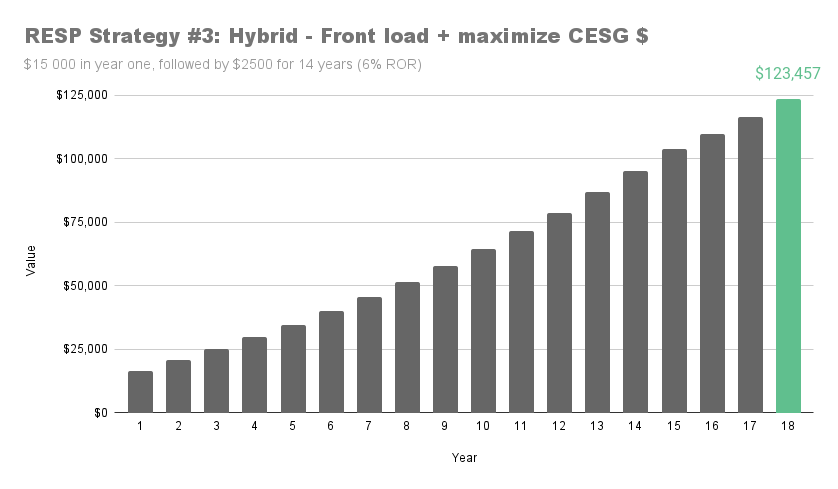 In contrast to Strategy #1, the hybrid approach would provide the beneficiary about $22k more with a final balance of $123 457 vs. $101 514.  It would be most effective if the $15 000 initial payment came from existing non-registered investment accounts.

I hope these scenarios and their explanations help you understand how to fund your child’s RESPs.

If you found this post informative and/or helpful, please consider donating to help with the cost of running this blog.  Don’t forget, half of all donations are given to Doctors Without Borders.

An interview with the creator of Beating the TSX, David Stanley

10 advantages DIY investors have over the pros

Why I am not a Bitcoin investor