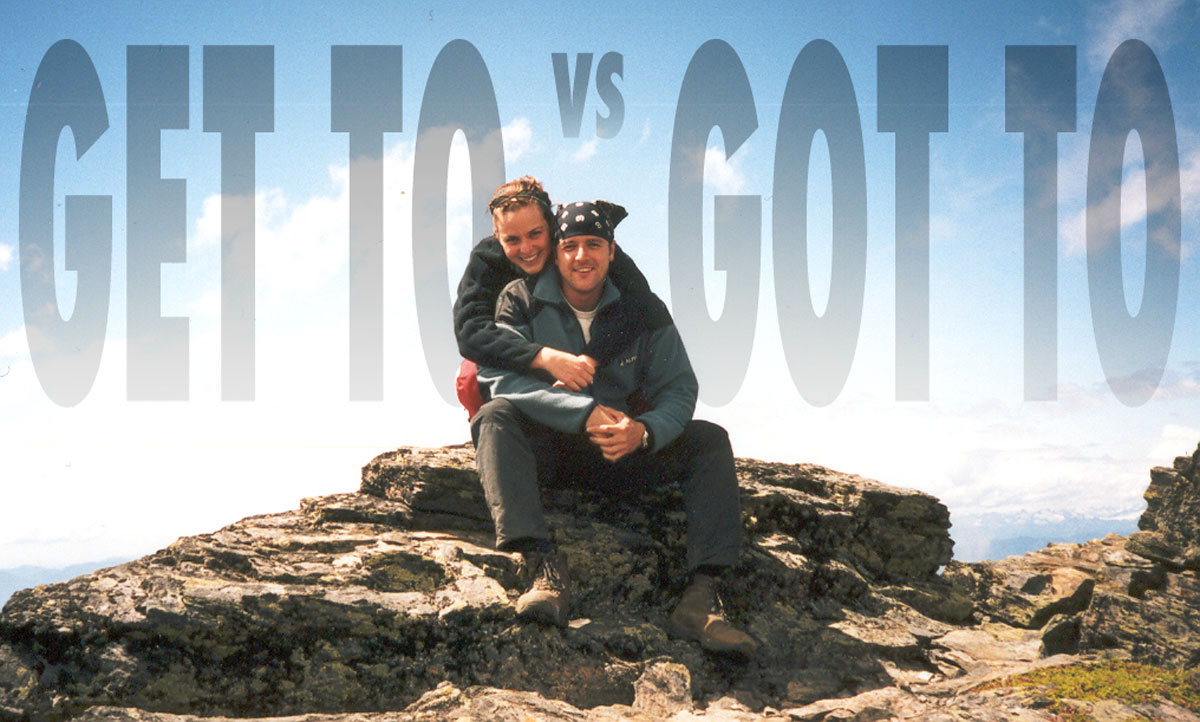 This story starts about a year before that photo was taken.

I stumbled into my sparsely furnished apartment tired, dirty, and hungry after a long day of hiking. I had moved to BC a few months before to start my family medicine residency and had been spending weekends when I wasn’t on call exploring the epic geography.

This particular hike happened twenty years ago, on Saturday, September 28th, 2002 and it was particularly gruelling – almost 3000 metres of elevation.  But it wasn’t the hike that made the date memorable.

As I unlaced my boots I remembered that a few weeks before I had been invited by a new acquaintance to a party in Vancouver that evening – an hour’s drive away.  But with legs full of lead, my stomach empty, and my skin caked with dust and grime, partying was the last thing on my mind.

Then I showered.  And I ate.  And I figured my legs could rest in the car almost as easily as on my futon.  So, I hummed and hawed until some quantum fluctuation in my brain tipped the scales and I got in my car.

An hour or so later I walked into the party, cracked a beer, and met a girl.  The party I almost didn’t go to was the one that would change my life.

Lindsay had flown in from Ontario to visit her sister that weekend – the hostess of the party.  As soon as we started talking every cell in my body shifted to see her a little better, to hear her a little more clearly.  She sparkled with energy and enthusiasm, even for the smallest things.

I, on the other hand, was a little reserved.  But she drew stories and opinions out of me effortlessly.  We left the party and walked around downtown Vancouver until long after the party had ended. I still remember the empty streets and easy conversation.  It was just us out there, Linds and me.  And it was suddenly clear that that was how I wanted to spend the rest of my life.

Lindsay’s job was as a communicative disorders assistant doing speech therapy mainly for kids with autism spectrum disorder.  She loved it and was extremely good at it but when we got married and had kids of our own, she decided that she wanted to be a mom full time.  We were fortunate that my income combined with our financial decisions allowed that.  But the passion for speech therapy never faded.

Fast forward sixteen years and our four kids have reached a level of independence that they don’t need their mom around all the time.  Suddenly, working in speech therapy is back on the table.  There is no need for Lindsay to go back to work for financial reasons, but the love of taking on some of the most challenging cases and teaching those kids the communication skills they need to function in the world never left.

So, Linds started looking for a job a few months ago.  It wasn’t a “You’ve got to get a job,” kind of situation, but rather “I might get to do what I love again”.  Quite a difference.

When money is not the primary motivation for how we choose work, there is a fundamental shift in how we think about it, the choices we have, and how we approach those conversations.  Someone I deeply respect described this contrast to me as the difference between a “get to” job vs. a “got to” job.  He later told me that he first heard about this idea from a speech by the sportscaster Ernie Johnson.

Linds didn’t need to rush into the first available opportunity.  When she found the clinic that excited her the most, she reached out with genuine openness and enthusiasm.  She wanted to do good work and to be around people with similar values.  The pay wasn’t just secondary, it was far down the list of priorities.

Relationships based on gratitude rather than need

Funny enough, once she found the team she wanted to work with, they weren’t hiring.  So, did Lindsay move on and accept another position that she was less excited about?  No, because acting from a place of financial security gave her options.  She offered to work pro bono for a few months, confident that once they work with her, they’d likely offer her a paid position.  But really, a paycheque is just a bonus for her.

So, the owner of the clinic offered to have a “We’re not hiring but let’s have coffee anyway” kind of interview.  An hour into that meeting, their coffees were cold and the conversation was still hot.  They drove to the clinic for a tour.  By that point, I think the job offer was a foregone conclusion.  It was a classic win-win.  They get an amazing person who does amazing work, and Lindsay gets to do what she loves.

That sparkle in Lindsay’s eyes that I got addicted to on that first night in Vancouver is back with every email she exchanges with her new boss/friend.  She can’t wait for her first day.  Would she feel the same way if she had to be working because we needed the paycheque?  I don’t think so.

Knowing when to change your mindset

Money changes how we think about everything, but particularly work. We spend so much of our lives working jobs because we need the money, it can be very hard to change that mindset once we have enough.

Sometimes we never feel like we have enough.  We tend to value work in dollars, even when we don’t need those new dollars anymore.  When our basic needs are taken care of, warm, soft, squishy things like joy, connection, craftsmanship, and “the greater good” surpass money on the list of priorities – or they should, at least.  Dollars are easier to define, understand, and quantify than those things, but that doesn’t mean they’re more important.

Don’t get me wrong – I’m no guru when it comes to this.  I only left a relatively high-paying job in medicine a few years ago, so I’m right in the middle of figuring this all out.  But one of the greatest benefits of financial independence is that it can change our attitude about work from “I’ve got to” to “I get to”.

What FIRE gets wrong

If you’re working at a job you hate and you feel like the effort is killing you, I can understand the simple appeal of not working; you likely just want to escape.  But the point of financial independence isn’t so that we can stop working.

Some people in the FIRE (financial independence, retire early) community think happiness is a 3-step process:

But this ethic is as wrong as it is oversimplistic.  Money is a tool, not a goal.  And more money won’t change how you think about money. Ten million dollars will do nothing other than complicate your life unless you figure out how to use it well.

Besides, we need work.  We’re not thriving unless we’re striving.  But we’re a lot happier when we can choose that work based on its meaning to us rather than its income potential.

This is the work you get to do, not the work you’ve got to do.  Work for the challenge, the joy, the curiosity, the struggle, the connection, the meaning, the excitement, the value to your community.  And most of all, the feeling at the end of the day of “That was hard, but damn, I feel good!”

If you want to work because you get to and not because you’ve got to, you need a financial plan.  But self-directed investors can have a hard time balancing all the factors that need to be considered.  If you’d like my help creating a comprehensive financial plan, email me: contact@dividendstrategy.ca.

Running DividendStrategy.ca costs money.  If you would like to support my efforts, you can donate here (half of all donations are given to Doctors Without Borders):

Why is the stock market crashing?