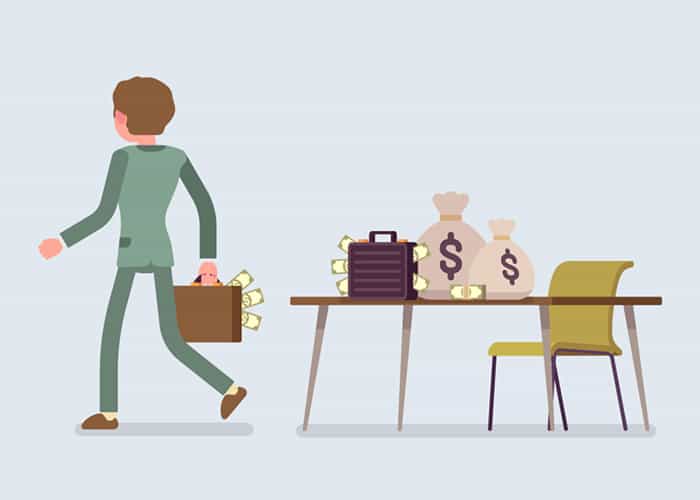 You’ve worked hard for your money.  You’ve accumulated wealth by being responsible with your spending and saving decisions.  Why?  So that you can use that money to enjoy a long, happy retirement.  But, contrary to most financial planning assumptions, research shows that few retirees manage the decumulation of their assets well.  Most are leaving money on the retirement table.

According to research by the Employee Benefit Research Institute,

“Across all wealth levels, 58 percent of retirees withdraw less than their investments earn, 26 percent withdraw up to the amount the portfolio earns, and 14 percent are drawing down principal.”

That means eighty-six percent of retirees are not drawing down their principal, even when it would be reasonable to do so.

In fact, when retirement expenses increase unexpectedly, only a small portion of retirees opt to tap into their principle, as economic theory would expect.  Instead, the vast majority choose to adjust their budget and decrease expenses. 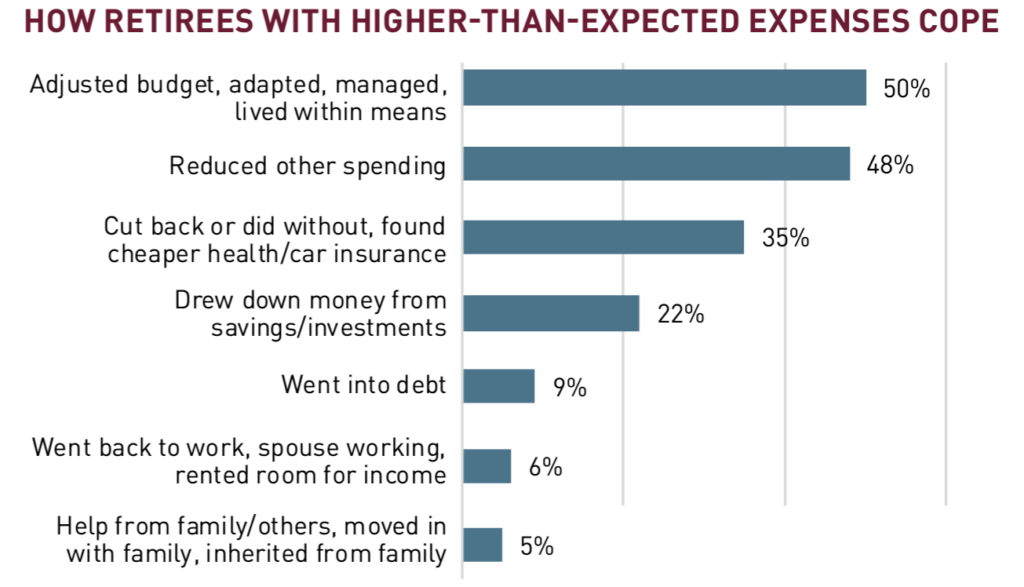 This is not an isolated finding.  A white paper by Blackrock showed that most retirees still had 80% or more of their pre-retirement savings left after almost two decades of retirement.

Percent of assets remaining after 17-to-18 years of retirement

Popular headlines and statistics about the widespread underfunding of retirement might make this look like good news.  But what it reveals is a deep-seated uncertainty among retirees, regardless of wealth.  This conservatism may come at the cost of truly enjoying the retirement lifestyle that many retirees worked so hard to secure.

It’s another example of the divergence between academic research and what happens in the real world – an area of research I find fascinating.  One of the pillars of modern economic theory is Modigliani’s 1954 “standard life-cycle theory” :

“The idea that people make intelligent choices about how much they want to spend at each age, limited only by the resources available over their lives. By building up and running down assets, working people can make provision for their retirement . . .”

In other words, while they are earning, rational individuals should save only as much as they need to save and those assets should be consumed, i.e. spent, in retirement.

But real people don’t do this.  As the charts above show, most retirees spend far less than they could.  There is a  “consumption gap” between what retirees can afford to spend and what they actually do spend.

Why are retirees leaving money on the table?

A closer look at the research reveals a common theme: retirees tend to use investment income to fund their lifestyles, but appear reluctant – even unwilling – to sell assets.

The EBRI research showed that only 18% of retirees were spending more than their household income (pensions, social security, interest, dividends, etc.).  This dropped to fewer than 15% of retirees with more than $500,000 of non-housing assets.

It’s that “income” word that makes all the difference.  Economists can make an excellent case that retirees shouldn’t care whether their income comes from capital gains versus dividends, interest income, annuity payments or pension payments (tax considerations aside), but retirees clearly have a preference.  The research shows that they are much more likely to spend income from those latter sources than capital gains generated from the selling of assets.

“So rather than determining their basic and discretionary expenditures and creating dynamic strategies to fund them, many retirees appear to be taking the opposite approach –  determining their guaranteed and steady income sources and adjusting their lifestyles to fit within that budget.”

– From: The Decumulation Paradox: Why Are Retirees Not Spending More?

For retirees, financial security is more important than spending

Leaving money on the table might not be ideal, but spending down your principal too quickly is even worse.  Security trumps lifestyle.  But what the data shows is that in many cases there is a lot more lifestyle that can be enjoyed without sacrificing security.  The problem is that, without a clear understanding of what a rational and safe decumulation strategy would be, most retirees defer to emotional decision-making.  They do what “feels right”.

Our brains are simply not wired to optimize complex systems like a retirement decumulation strategy.  So we end up making decisions using mental short cuts.  But short cuts are risky – there are over 180 cognitive biases that interfere with how we perceive reality, process data, and make good decisions.  Here are a few examples.

Loss aversion is a universal cognitive bias that makes the average person feel losses about 2.5x more intensely than equivalent gains.  Research has shown that retirees display “hyper-loss-aversion”, feeling losses 5 to 10 times more intensely than gains.  This may cause retirees to view withdrawing principal as a loss, whereas income from dividends, interest, pensions, etc. is viewed as a gain that can be spent.

Familiarity bias is the tendency for individuals to prefer what is familiar.  After years of accumulating assets in their working lives by spending less than they earn, it can be challenging to reverse this mindset.  Transitioning from a net saver to a net spender is unfamiliar and uncomfortable – even when it’s the rational path.

The endowment effect is the tendency to assign more value to the assets we own than what they would be worth on the open market, resulting in an unwillingness to give them up.  Achieving a specific savings goal, retirees can become attached to that value, preventing them from spending down those assets.

I meet a lot of people close to or in retirement who are still focused on maximizing investment returns – even if they already have more than enough.  I think most of them are locked in the accumulation mindset and think more money will give them the feeling of security they are seeking.  How much money will it take to accomplish that?  There’s usually just one answer: more.

Financial security is a worthy goal, but taking on more investment risk in hopes that higher returns will follow is usually a misguided approach.  More money doesn’t change how we think about money.  What most retirees actually want is assurance that their wealth and standard of living will be protected. 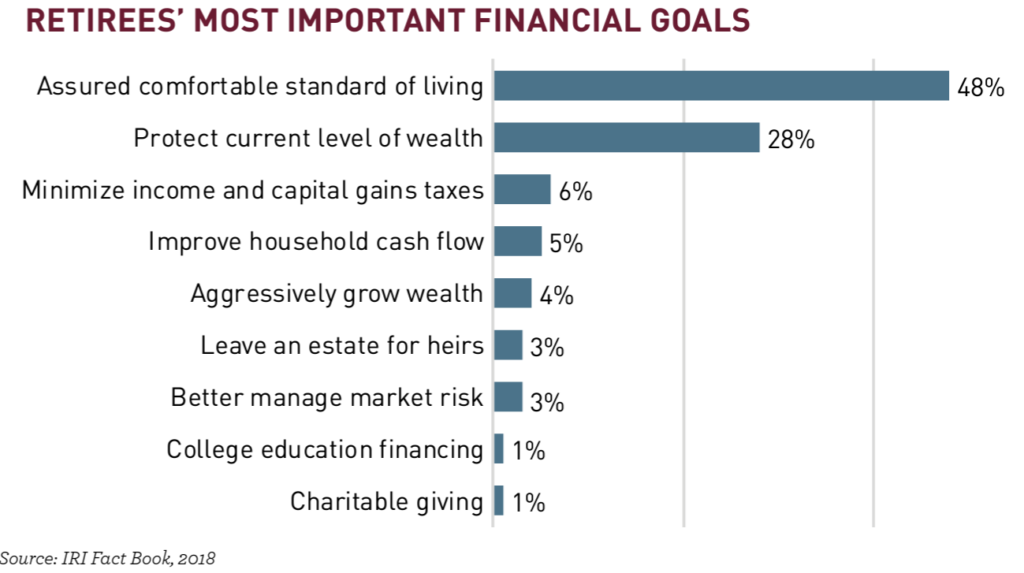 What is often missing is an understanding that financial security is two things: an emotional state, and a mathematical one.  This is the root of “the decumulation paradox”.  It’s not enough to have a mathematically sound decumulation strategy.  That strategy has to take into account your personality and emotions.

What most retirees need is a decumulation strategy that minimizes risks, is practical to implement, and allows you to maximize your happiness during the retirement years.  Here are five ways retirees can get the most from their money and their time:

Many people save and invest diligently over the years only to not spend it in retirement.  Studies show that this is much more of a psychological issue than a financial one.  Most retirees are reluctant to spend down their principal, i.e. sell assets, but are much more willing to spend income.  Understanding and accepting this reality is essential to designing a decumulation strategy that optimizes both life satisfaction and wealth security.

I just wanted to send out a huge thank you to those who support this site.  Your donations are enormously appreciated and go a long way toward keeping this site free for those who need the information but are not in a position to contribute.  In particular, I wanted to recognize DividendStrategy.ca’s most recent top supporters – thank you! 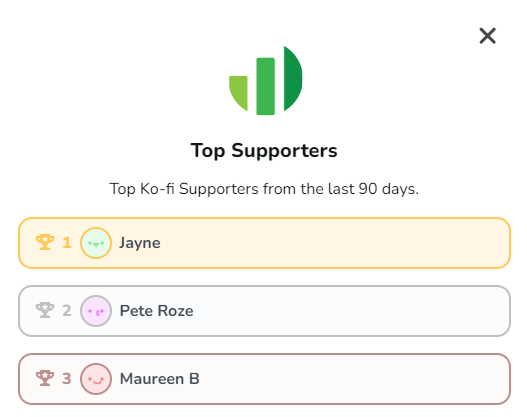 What’s the point of wealth?